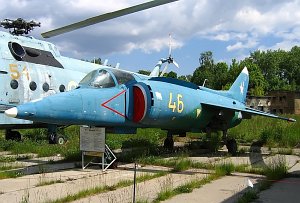 Photo ©: Alexander Marcenco (Photos at airliners.net)
The Yakovlev Yak-38 is a three-engine single-seat vertical takeoff and landing (VTOL) carrier-based fighter aircraft developed by the Soviet Design Bureau OKB Yakovlev (OKB-115).
The Yak-38 was the Soviet Naval Aviation's first and only operational VTOL fighter aircraft. The both Rybinsk RD-38 engines are only used for vertical lift.
- to top -