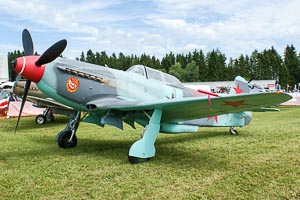 Photo ©: Karsten Palt
The Yakovlev Yak-9 is a single-engine single-seat fighter aircraft developed by the Soviet Design Bureau OKB Yakovlev (OKB-115).
The Yak-9 is a development of the Yakovlev Yak-7. The Yak-9U is a series of reproduction aircraft produced by Yakovlev between 1993 and 2002 powered by an Allison V-1710 liquid cooled piston V-12 engine like the Yak-3U / Yak-3M.
- to top -