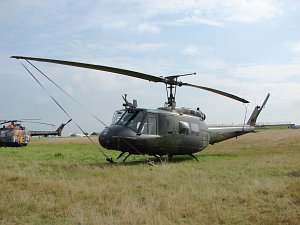 Photo ©: Karsten Palt
The Bell 205 is a single-engine light utility helicopter produced by the US-American manufacturer Bell Helicopter Company, today Bell Helicopter Textron. The military main variants were the Bell UH-1D, UH-1E, UH-1F, UH-1H, UH-1L, UH-1P, UH-1V.
The Bell 205 is a stretched development of the Bell 204. The Bell 205 was license-built in Italy by Agusta(Agusta-Bell 205 & 205A-1) and Japan by Fuji Heavy Industries (Fuji-Bell 205A-1). 352 Bell UH-1D have been assembled by Dornier for the German Forces (Bundeswehr).
- to top -