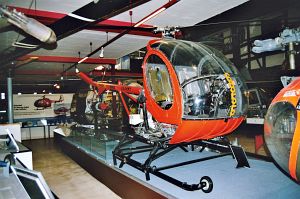 Photo ©: Karsten Palt
The Hughes 269 / 300 is a single-engine two- or three-seat light utiltiy helicopter produced by the US-American manufacturer Hughes Helicopters, Inc. and later by Schweizer Aircraft Corporation. The TH-55 Osage is a trainer variant for the US Army.
The Hughes 269A was also license-built by Kawasaki Kokuki K.K., Japan as the TH-55J. The 269C was license-built in Italy by Breda Nardi as the NH-300C. The 269C (300C) is still in production by Schweizer Aircraft, a subsidiary of Sikorsky Aircraft. The current model is the Schweizer 300CBi.
- to top -