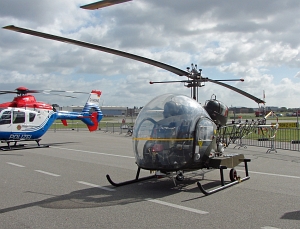 Photo ©: Karsten Palt
The Bell 47 is a single-engine two-seat light utility helicopter produced by the US-American manufacturer Bell Aircraft Corporation, later Bell Helicopter Company, today Bell Helicopter Textron. The designation for Bell 47 is US Army duties was H-13 Sioux.
The Bell 47 was also produced under license by Agusta (Italy), Kawasaki Heavy Industries (Japan) and Westland (UK). Some special variants with enclosed cabin and fuselage are the Bell 47H (three seats) and the Bell 47J Ranger (four seats). A conversion kit with turboshaft engine (turbine) was available by Soloy.
- to top -