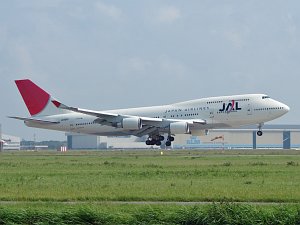 Photo ©: Karsten Palt
The Boeing 747-400 is a four-engined long-range widebody airliner with a capacity of maximum 660 passengers in a partial double deck configuration produced by the American manufacturer Boeing Commercial Airplanes. The 747-400 was also produced as a cargo freighter.
The Boeing 747-400 is a development of the Boeing 747-300 with a slightly increased wing span and winglets, with more powerful engines and a two man crew cockpit. The engine options are: Pratt and Whitney PW4000, General Electric CF6-80C2B1F/B5F or Rolls-Royce RB211-524G2-19/G3-19/H2-19/G2-T-19/G3-T-19/H2-T-19.