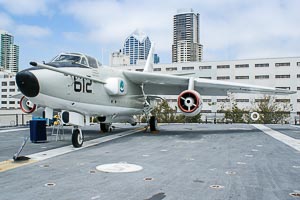 Photo ©: Karsten Palt
The Douglas A3D (A-3) Skywarrior is a twin-engined three-seat carrier-based strategic bomber aircraft produced by the US-American manufacturer Douglas Aircraft Company in operation with the US Navy. The Skywarrior was also used as a tanker aircraft, reconnaisance aircraft and as an electronic warfare platform. The A3D was 1962 redesignated in A-3.
- to top -