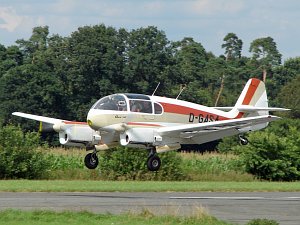 Photo ©: Karsten Palt
The Aero Ae-45 resp. Ae-145 is a twin-engined four-seat light touring and corporate travel aircraft with retractable landing gear produced by the Czechoslovak manufacturer AERO Vodochody a.s.. A further variant of the Ae-45 was the Ae-45S Super-Aero.
The Aero Ae-45 was the first aircraft developed by AERO after WWII. The versions Ae-45S and Ae-145 were produced by Let Kunovice. The Ae-45S was also license-built in the Peoples Republic of China.
- to top -