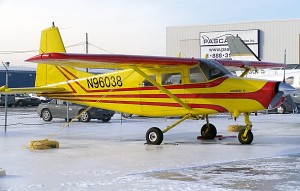 Photo ©: Marian Musil (photos at airliners.net)
The Aermacchi AL-60 / Lockheed-Azcarate LASA-60 is a single-engine six-seat light touring and utility aircraft developed by the US-American manufacturer Lockheed Corporation. Early aircraft were produced by Lockheed-Azcarate in Mexico as LASA-60. After obtaining a license most aircraft were produced by Aermacchi as AL-60 Santa Maria.
- to top -