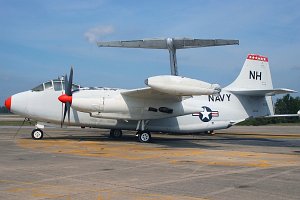 Photo ©: Gary Chambers (Photos at airliners.net)
The North American AJ Savage is a three-engine carrier-based bomber aircraft produced by the US-American manufacturer North American Aviation, operated by the US Navy. The AJ-1 and AJ-2 Savage was redesignated A-2 Savage in 1962. The AJ Savage was also used as a aereal refueling tanker aircraft.
The AJ Savage is powered by two radial-engines and a single rear-mounted turbojet engine. The AJ-2P was a photo-reconnaissance variant (30 built).
- to top -