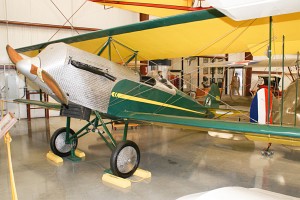 Photo ©: Karsten Palt
The American Eagle A-1 / A-101 is a single-engine two- or three-seat trainer biplane aircraft produced by the American manufacturer American Eagle Aircraft Corporation.
The A-101 is the improved production variant with ailerons on the lower wing. Later production aircraft of the A-101 were powered by the 100 hp Curtiss OX-6 engine instead of the 90 hp Curtiss OX-5 of the earlier models. Other engines were also available. A further development was the A-129 called the ?longnose Eagle?.
- to top -