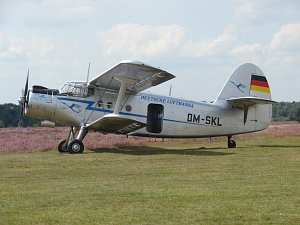 Photo ©: Karsten Palt
The Antonov An-2 is a single-engine multi-purpose biplane aircraft developed by the Soviet design bureau OKB Antonov (today Antonov ASTC, Ukraine).
The An-2 was produced by PZL-Mielec in Poland since 1961. The An-2 was also license-produced in the Peoples Republic of China as Xian Y-5.