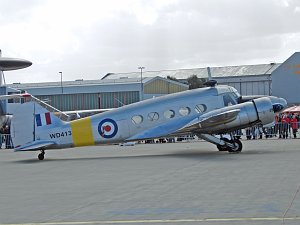 Photo ©: Karsten Palt
The AVRO 652A Anson is a twin-engined trainer aircraft produced by the British manufacturer AVRO, A.V. Roe and Company. The Anson was used as a liaison aircraft also.
The AVRO Anson was originally designed for maritime reconnaissance operations. After WWII several AVRO Anson were operated as civil passenger aircraft. 8138 were produced by Avro and 2882 by Canadian Federal Aircraft.
- to top -