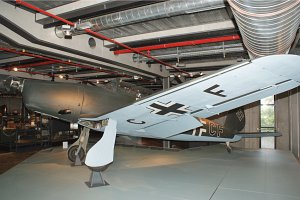 Photo ©: Karsten Palt
The Arado Ar 96 is a single-engine two-seat trainer aircraft produced by the German manufacturer Arado Flugzeugwerke GmbH. The Ar 96 was the standard advanced trainer aircraft of the German Luftwaffe during WWII.
The Arado Ar 96 was built by AGO Flugzeugwerke, a former Junkers subsidiary and later by the czech manufacturers Avia and Letov. Post-war production by Avia continued until 1948 as Avia C.2B.
- to top -