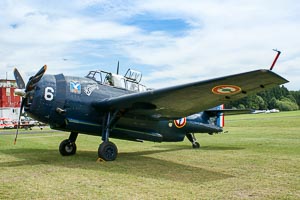 Photo ©: Karsten Palt
The Grumman TBF Avenger is a single-engine three-seat torpedo bomber aircraft produced by the US-American manufacturer Grumman Aircraft Engineering Corporation and the Eastern Aircraft division of General Motors, then designated TBM Avenger.
Some Avengers were converted to water-bombers after their military service.
- to top -