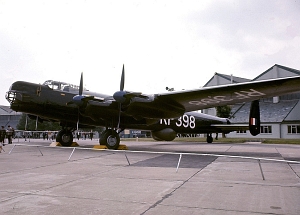 Photo ©: Steve Williams (photos at airliners.net)
The AVRO 694 Lincoln is a four-engine heavy bomber aircraft produced by the British manufacturer AVRO, A.V. Roe and Company.
The AVRO Lincoln is a development of the AVRO 683 Lancaster, the first variants were initially designated Lancaster IV and V. The Lincoln was the last piston-engined bomber aircraft in service with the Royal Air Force.
- to top -