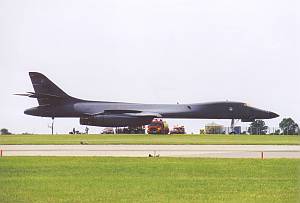 Photo ©: Karsten Palt
The Rockwell B-1 Lancer is a four-engine variable-sweep wing supersonic heavy strategic bomber with a maximum weapon-payload of 125,000 lbs (56.700 kg) produced by the US-American manufacturer Rockwell International in operation with the United States Air Force.
Although the first flight of the B-1A was in 1974 the B-1B Lancer was not operational until 1985. Total production was 100 B-1B and 4 B-1A.
- to top -