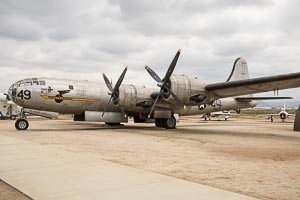 Photo ©: Karsten Palt
The Boeing B-29 Superfortress (Model 345) is a four-engine long-range heavy bomber aircraft produced by the US-American manufacturer Boeing Company.
The B-29 Superfortress was equipped with pressurized areas for the crew for the ability to operate in greater heights. The B-29 was the first aircraft that dropped nuclear bombs (Enola Gay, Hiroshima and Bockscar, Nagasaki).
- to top -