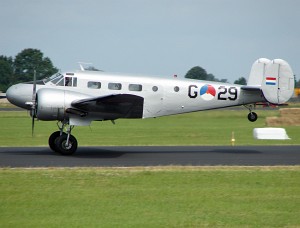 Photo ©: Karsten Palt
The Beechcraft Model 18 is a twin-engine light utility aircraft produced by the US-American manufacturer Beech Aircraft Corporation. The Beech 18 was in military service as military transport and trainer aircraft during and after World War II amongst others by the USAAF/USAF, US Navy and the Royal Air Force. Military variants include the C-45 Expeditor, F-2 Expeditor, AT-7 Navigator, AT-11 Kansan, SNB Kansan and JRB.
The Beech Model 18 was built between 1937 and 1970 in at least 32 variants.
- to top -