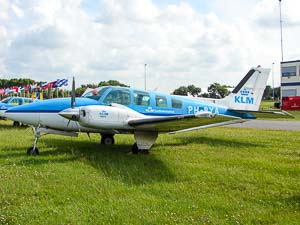 Photo ©: Karsten Palt
The Beechcraft 55 / 56 / 58 Baron is a twin-engined four-to-six-seat light touring aircraft with retractable landing gear produced by the US-American manufacturer Beech Aircraft Corporation, later Hawker Beechcraft Corporation, today Beechcraft a brand of Textron Aviation.
The Beech Baron is a development of the Beech 95 Travel Air which itself is a development of the single-engine Beech Bonanza. Beech Baron Models 55 & 56 have total length of 8,53m (27ft 11in). The current production model is the Beechcraft Baron G58.
- to top -