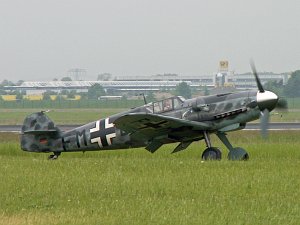 Photo ©: Karsten Palt
The Messerschmitt Bf 109 is a single-engine single-seat fighter aircraft produced by the German manufacturer Bayerische Flugzeugwerke, later Messerschmitt AG.
The Bf 109 is the worlds most produced fighter aircraft and the most produced aircraft in World War II. The Bf 109 remained in production after WWII in Spain and Czechoslovakia with the further developments Hispano Aviación HA-1112 and Avia S-99 / S-199.