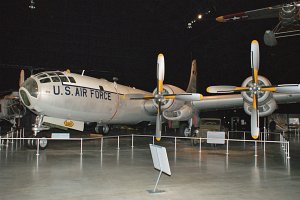 Photo ©: Karsten Palt
The Boeing B-50 Superfortress (Model 345-2) is a four-engine long-range heavy bomber aircraft produced by the US-American manufacturer Boeing Company.
Although the B-50 is a direct development of the B-29 Superfortress and initially named B-29D it was re-designated B-50 due to the huge amount of improvements. The changes include much more powerful engines in new nacelles. 132 B-50s were later converted to KB-50 aerial tankers. 112 of the KB-50 tankers were modified to the KB-50J version by addition of two 5200 lbf (23 kN) General Electric J47 jet engines, so they could fly fast enough to refuel jet aircraft. Some of the tankers served until 1965 with the US Air Force and were in action during the Vietnam conflict. In 1949 a B-50A named the Lucky Lady II made the first nonstop flight around the world.
- to top -