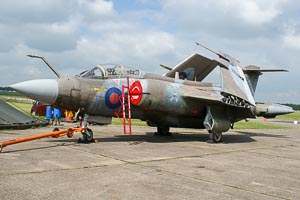 Photo ©: Karsten Palt
The Blackburn B-103 Buccaneer is a twin-engined two-seat low-level strike aircraft produced by the British manufacturer Blackburn Aircraft Limited and later Hawker Siddeley.
The B-103 Buccaneer was in duty with the Royal Navy, the Royal Air Force and the South African Air Force.
- to top -