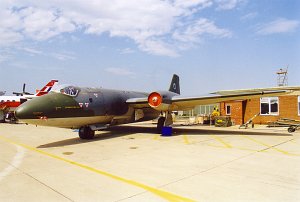 Photo ©: Karsten Palt
The English Electric / BAC Canberra is a twin-engined two- or three-seat light bomber and reconnaissance aircraft produced by the British manufacturer English Electric (later BAC, British Aerospace Corporation).
The Canberra was also license-produced in large numbers (403) by Glenn L. Martin Company as Martin B-57. The Canberra was in service with the Royal Air Force from 1951 until 2006.
- to top -