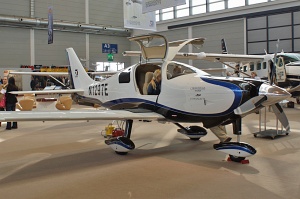 Photo ©: Karsten Palt
The Cessna 400 Corvalis TT is a single engine four-seat light touring aircraft produced by the US-American manufacturer Cessna Aircraft Company, today a brand of Textron Aviation.
The Cessna 400 Corvalis TT is a development of the Columbia 300 and was originally produced by Columbia Aircraft Manufacturing Corporation as the Columbia 400. The aircraft's certified name is LC42-550FG (Lancair Certified, Model 41, Continental 550 engine, Fixed Gear).
Current production Model (as of 2016) is the Cessna TTx (certified as T240).
- to top -