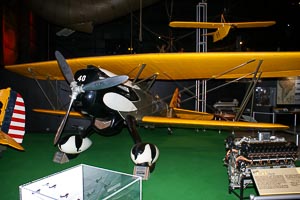 Photo ©: Karsten Palt
The Curtiss P-6 Hawk is a single-engine single-seat fighter biplane aircraft produced by the US-American manufacturer Curtiss Aeroplane and Motor Company, later Curtiss-Wright Airplane Company.
The Curtiss P-6 is a development of the Curtiss P-1.
- to top -