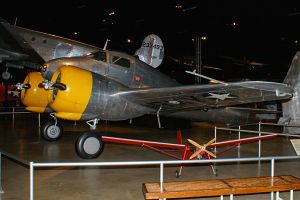 Photo ©: Karsten Palt
The Curtiss-Wright AT-9 Jeep is a twin-engine advanced trainer aircraft produced by the US-American manufacturer Curtiss-Wright Airplane Company. It was operated by the United States Army Air Forces (USAAF) only.
The AT-9 was initially nicknamed Fledgling. The single built prototype CW-25 had a fabric covered fuselage and wings. The production aircraft were of all metal skin contruction. 491 AT-9 and 300 AT-9A were built.
- to top -