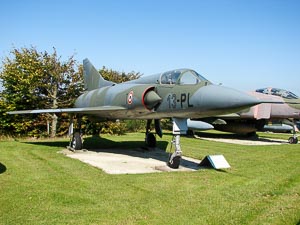 Photo ©: Karsten Palt
The Dassault Mirage 5 and Mirage 50 are single-engine single-seat supersonic multirole combat aircraft produced by the French manufacturer Avions Marcel Dassault - Breguet Aviation.
The Mirage 5 is a development of the Dassault Mirage III without all-weather capabilities, designed as a ground-attack aircraft. The Mirage 50 is a further development designed as a multi-role fighter bomber aircraft. A further development is the IAI Nesher, designed by IAI Israel Aircraft Industries for the service within the Israel Air Force. The total production numbers include 531 Mirage 5 and 24 Mirage 50, plus 61 IAI Nesher.
- to top -