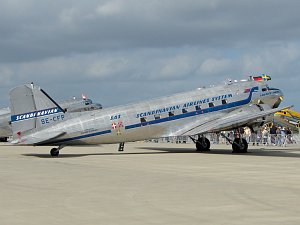 Photo ©: Karsten Palt
The Douglas DC-3 is a twin-engined short-to-medium-range Airliner with a capacity of maximum 32 passengers and a military utility transport aircraft produced by the US-American manufacturer Douglas Aircraft Company. The military main-variant was the C-47 Skytrain.
The DC-3 is a development of the Douglas DC-2. The DC-3/C-47 was produced in countless variants. After WWII thousands of surplus C-47 Skytrain were converted to be used as civil airliners. The Lisunov Li-2 was a copied variant of the DC-3 with production in the Soviet Union. The DC-3 was also license-produced in Japan as Nakajima L2D. Today (2010) many DC-3 remain in commercial operation. The Basler BT-67 is one of the turboporp conversion variants of the DC-3.