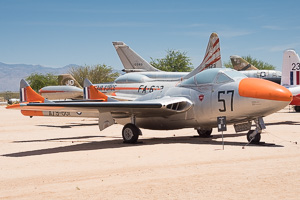 Photo ©: Karsten Palt
The de Havilland D.H.100 Vampire is a single-engine single- or two-seat jet fighter and fighter bomber aircraft produced by the British manufacturer de Havilland Aircraft Company. The D.H.113 Vampire is a two-seat night fighter variant, the D.H.115 is a two-seat trainer variant.
The Vampire was also built in Australia, Canada, France, Italy and Switzerland.
- to top -