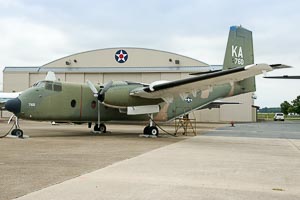 Photo ©: Karsten Palt
The de Havilland Canada DHC-4 Caribou is a twin-engined STOL transport aircraft produced by the Canadian manufacturer de Havilland Aircraft of Canada Ltd..
The US Army was the largest operator of the DHC-4 Caribou (designation AC-1, later CV-2 Caribou) with 173 aircraft, later transfered to the US Air Force (designation C-7 Caribou).
- to top -