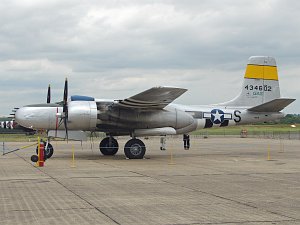 Photo ©: Karsten Palt
The Douglas A-26 Invader is twin-engined three-seat light bomber aircraft produced by the US-American manufacturer Douglas Aircraft Company. The A-26 was redesignated B-26 in 1948.
Many Invader were converted to executive passenger transport aircraft for six- to eight passenger afer their military service.
- to top -