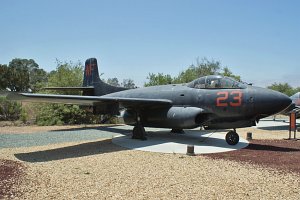 Photo ©: Karsten Palt
The Douglas F3D / F-10 Skyknight is a twin-engined two-seat carrier-based night jet fighter aircraft produced by the US-American manufacturer Douglas Aircraft Company in operation with the United States Navy and the United States Marine Corps. In 1962 the F3D was redesignated F-10, the F3D-1 became F-10A and the F3D-2 became F-10B.
The total production numbers include three XF3D-1 prototyp aircraft, 28 F3D-1 and 237 F3D-2. The Skyknight saw service in the Korean War and in the Vietnam War. Some Skyknight were modified to EF-10B (35) and TF-10B (55) as electronic reconnaissance and countermeasure aircraft and were used during the Cuban Missile Crisis and the Vietnam War.
- to top -