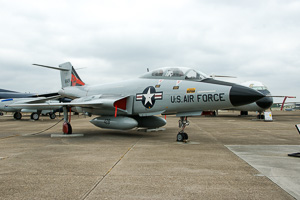 Photo ©: Karsten Palt
The McDonnell F-101 Voodoo is a twin-engined two-seat jet fighter and fighter bomber aircraft produced by the US-American manufacturer McDonnell Aircraft Corporation. The F-101 served also as a photo reconnaissance aircraft.
The F-101A and the upgrated F-101C were a single-seat fighter bomber variants.
- to top -