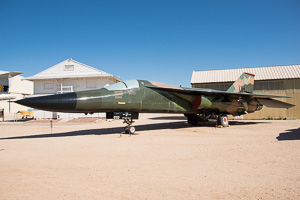 Photo ©: Karsten Palt
The General Dynamics F-111 Aardvark is a twin-engined two-seat sweep wing fighter bomber aircraft produced by the US-American manufacturer General Dynamics Corporation.
The F-111 was only operated by the US Air Force and the Royal Australian Air Force (F-111C/F-111G). The FB-111 is a strategic-bomber variant. The EF-111A Raven is an electronic warfare aircraft variant. 42 F-111A were converted by Grumman Aerospace Corporation.
- to top -