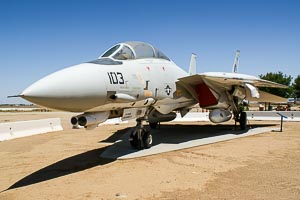 Photo ©: Karsten Palt
The Grumman F-14 Tomcat is a twin-engined two-seat carrier-based supersonic sweep wing jet fighter aircraft produced by the US-American manufacturer Grumman Aerospace Corporation. The Tomcat was operated by the United States Navy and the Islamic Republic of Iran Air Force only.
- to top -