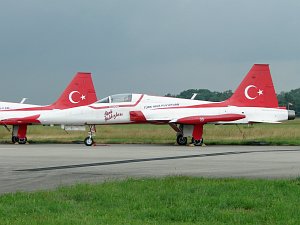 Photo ©: Karsten Palt
The Northrop F-5 is a twin-engined single-seat light jet fighter aircraft produced by the US-American manufacturer Northrop Corporation (today Northrop Grumman Corporation). Main versions are the F-5A Freedom Fighter and the F-5E Tiger II with their two-seat trainer variants F-5B and F-5F.
The F-5E Tiger II differs from the F-5A Freedom Fighter in having more powerful General Electric J85-GE-21 (22,2 kN / 5000 lbf) engines instead of the J85-GE-13 (18,2 kN / 4080 lbf). The fuselage is enlarged and the wings were modified with an increased wing area. The more modern avionics equipment includes a radar system. The F-5 was also licence-built in Canada by Canadair, in Spain by CASA, in the South Korea and Taiwan.
- to top -