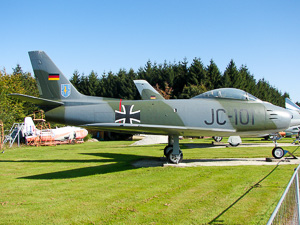 Photo ©: Karsten Palt
The North American F-86 Sabre is a single-engine single-seat jet fighter aircraft produced by the US-American manufacturer North American Aviation. The FJ-2, FJ-3 and FJ-4 (later F-1E) as well as the FJ-4B (later AF-1E) were US-Navy and US Marine Corps carrier-capable fighter bomber variants.
The F-86 Sabre was also licence-built by Canadair in Canada as the Sabre Mk.2, Sabre Mk.4, Sabre Mk.5 and Sabre Mk.6 and by Mitsubishi, Japan. The variant F-86F was license-built in a modified version by Commonwealth Aircraft Corporation (CAC) in Australia as the CA-27 Sabre. The F-86 was also assembled by Fiat, Italy from US-production parts.