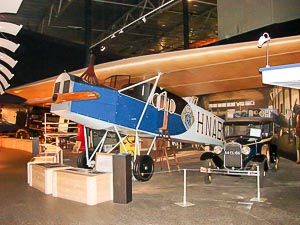 Photo ©: Karsten Palt
The Fokker F.II is a single-engine five-seat airliner developed by the German manufacturer Fokker Aeroplanbau GmbH. Production was carried out by Fokker Aeroplanbau, Fokker, N.V. Koninklijke Nederlandsche Vliegtuigenfabriek and the German airline Deutsche Aero Lloyd as the Fokker-Grulich F.II.
The majority of the F.II production was performed by Deutsche Aero Lloyd, the predecessor of the German Luft Hansa, in Berlin-Staaken. The Fokker-Grulich F.II had an enclosed cockpit.
- to top -