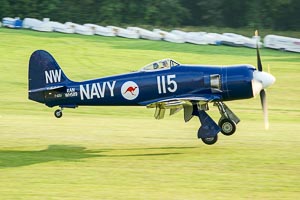 Photo ©: Karsten Palt
The Hawker Sea Fury is a single-engine single-seat carrier-based fighter bomber aircraft produced by the British manufacturer Hawker Siddeley Aircraft Ltd.. The land-based variant Hawker Fury was produced for the Iraqi Air Force also known as the Baghdad Fury.
The Hawker Sea Fury is a development of the Hawker Tempest. The Sea Fury F 50 was also license-built by the Dutch manufacturer Fokker (24 aircraft).
- to top -