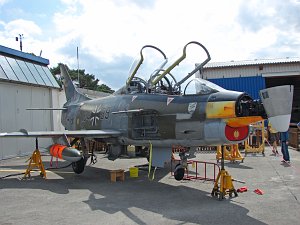 Photo ©: Karsten Palt
The Fiat G.91 is a single-engine single-seat fighter bomber and reconnaissance aircraft produced by the Italian manufacturer Fiat Aviazione (later Aeritalia).
The G.91 was operated by the Italian Air Force, the German Air Force (Luftwaffe) and by the Portuguese Air Force.
- to top -