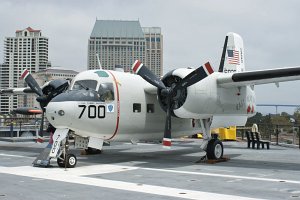 Photo ©: Karsten Palt
The Grumman C-1 Trader is a twin-engined carrier-based transport aircraft (COD - Carrier Onboard Delivery) produced by the US-American manufacturer Grumman Aircraft Engineering Corporation operated by the US Navy from 1956 until 1988. The C-1 was desginated TF-1 Trader until 1962.
The Grumman C-1 Trader is a transport variant of the Grumman S-2 / S2F Tracker. The Brazilian Navy acquired some modernized turboprop-powered C-1 for use on its aircraft carrier São Paulo.
- to top -