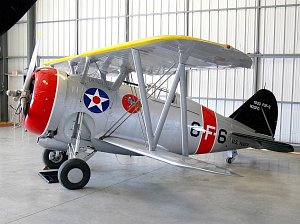 Photo ©: Robert Domandl (Photos at airliners.net)
The Grumman F3F is a single-engine single-seat fighter biplane aircraft produced by the US-American manufacturer Grumman Aircraft Engineering Corporation. The F3F was operated by the United States Navy and the United States Marine Corps.
The Grumman F3F is a development of the Grumman F2F. The F3F was the last US Navy biplane fighter aircraft. A few F3F were used by the US Air Force as a ferry-pilot trainer, designated UC-103.
- to top -