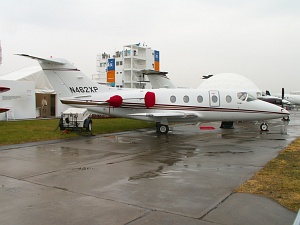 Photo ©: Karsten Palt
The Hawker-Beechcraft Hawker 400XP is a twin-engined corporate jet aircraft for up to 8 passengers produced by the US-American manufacturer Hawker Beechcraft Corporation. The Hawker 400XP was initially developed and produced by Mitsubishi Heavy Industries as the MU-300 Diamond. The production line was bought by Beech Aircraft Corporation in 1986, then redesignated as the Beechjet 400. The trainer variant Beechjet 400T is operated by the Japan Air Self Defence Force and the United States Air Force (designation T-1 Jayhawk).
The Mitsubishi MU-300 Diamond I and IA were powered by Pratt and Whitney Canada JT15D-4 or JT15D-4D turbofan engines. The MU-300-10 Diamond II was redesignated Beechjet 400 after takeover of the production line by Beechcraft. The updated Beechjet 400A was produced as the Raytheon Beechjet 400A and then Raytheon Hawker 400XP resp. Hawker-Beechcraft Hawker 400XP.
- to top -