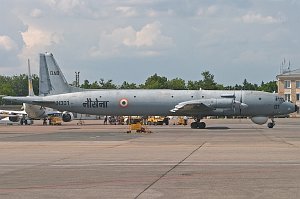 Photo ©: Teemu Tuuri ? FAP (Photos at airliners.net)
The Ilyushin Il-38 is a four-engine long-range maritime patrol and anti-submarine aircraft developed by the Soviet design bureau Ilyushin OKB. The Il-38 was operated by the former Soviet Navy and is still in operation with the Russian Navy and the Indian Navy.
The Il-38 is a variant of the Ilyushin Il-18 airliner.
- to top -