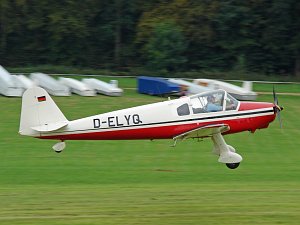 Photo ©: Karsten Palt
The Klemm Kl 107 is a single-engine two-seat sport and trainer aircraft produced by the German manufacturer Leichtflugzeugbau Klemm GmbH, later Bölkow GmbH.
Only 5 prototypes and approx. 20 series aircraft were produced during World War II. The post-war production models were the Kl 107B and the Kl 107C. The later Kl 107D was produced by Bölkow as the Bo 207.
- to top -