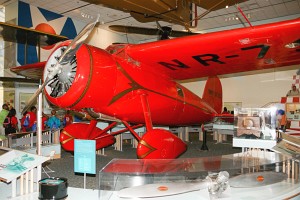 Photo ©: Karsten Palt
The Lockheed Vega is a single-engine seven-seat passenger aircraft produced by the US-American manufacturer Lockheed Corporation.
The Vega was designed by John Knudsen "Jack" Northrop and Gerard "Jerry" Vultee. It was used for several record setting or breaking flights like the first crossing of Arctis, the first women's Atlantic Ocean crossing flight Wiley Posts flights round the world. The first variants Vega 1, Vega 2 could seat four passengers and a pilot.
- to top -