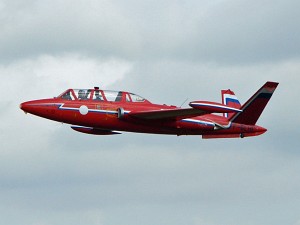 Photo ©: Karsten Palt
The Fouga CM.170 Magister is a twin-engined two-seat jet trainer aircraft produced by the French manufacturer Fouga, later Potez Air-Fouga. The CM.175 Zéphyr is a carrier-based variant for the French Navy (Aéronavale).
The Fouga Magister was license-built in Germany by Flugzeug Union Süd GmbH (Heinkel/Messerschmitt), in Finland by Valmet and in Israel by IAI, Israel Aircraft Industries as the IAI Tzukit.
- to top -