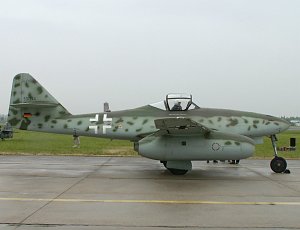 Photo ©: Karsten Palt
The Messerschmitt Me 262 is a two-engined multi role jet fighter aircraft produced by the German manufacturer Messerschmitt AG. Developed in world war II for the German Luftwaffe of the Third Reich, the Me 262 was operational as a fighter, night fighter, interceptor, fighter bomber and as a reconnaissance aircraft.
The Messerschmitt Me 262 was the world's first operational jet fighter aircraft. The fighter variants were called Schwalbe (swallow), the fighter bomber variant Sturmvogel (petrel).
- to top -