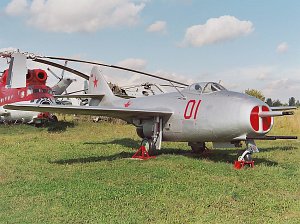 Photo ©: Flavien Breitenmoser (Photos at airliners.net)
The Mikoyan-Gurevich MiG-9 is a twin-engine single-seat jet fighter and fighter bomber aircraft developed by the Soviet Design Bureau Mikoyan-Gurevich OKB.
The MiG-9 was the first soviet jet aircraft together with Yak-15 (first flight both on April 24/1946).
- to top -